Algorithm for converting a finite state machine into a regular expression

I have found a new way to do this. I think.

Several such algorithms do exist. Many of these algorithms result in unreadably large and complex regexes. As mentioned, many regexes are equivalent, there is no canonical "simple" regex for a given regular language and programatically simplifying a regular expression is of unlimited algorithmic complexity. This means that an algorithm which generally produces a simple output is highly desirable.

First, we consider the set of all states in our finite state machine. Call them "A", "B", "C" and so on. Use variables as shorthand terms, such as:

Next we can define juxtaposition as our "string concatenation" operator. 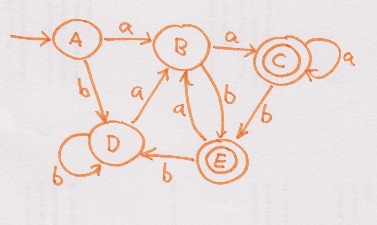 We then formulate this as a set of simultaneous equations:

Now, because we want a list of all the strings which this FSM will accept, observe that what we seek to calculate is C union E. This can be achieved using algebraic substitution... of a sort.

The order in which substitutions are carried out is quite important. Since C union E is desired, these should be calculated last. Here is one way to do it.

Since A is known, eliminate it:

Leave C for the moment. Notice how our expression for D contains D itself as a term on the right-hand side. This means that there is a loop present here: for any string which leads to "D", you can add a "b" on the end and you will still be at "D". Or, indeed, any number of instances of "b"! So we can simplify this:

It's pot luck from here on. It's best to starify a term last thing before you eliminate it, so starify C:

Substitute in to C:

So our answer is the disgustingly ugly:

This answer is technically correct but it's ridiculous. Still, it's a naive application of the algorithm. As alluded to above, there are many and various obvious ways to simplify each expression at each stage. A different substitution route might also have helped. This is the first time I've tried this calculation by hand, in fact, and I thought it would have worked out better. Maybe different methods could be applied to make this work out better.

Anyway my point is:

Instead of constructing one equation for each state in the FSM, construct an equation for each state-set in C. Construct these state-sets recursively, working backwards from the state-set consisting of all the final states, in this case {"C", "E"} (write C|E). This is done by manufacturing an "inverse map", g. For each symbol in our alphabet, we find all the states where f(<this state>, <this symbol>) is in C|E. Thus:

A new state-set, B|C, has appeared. We repeat the process for this state-set, iterating backwards until we stop hitting repeats. (For a k-state FSA, there are only 2k possible state-sets so this is bound to happen eventually.)

No new state-sets have appeared, so we are now done.

Finally, observe that A|B|C|D|E contains the initial state "A", so it can be reached with an empty string, "".

So we construct the following simultaneous equations. Putting them in the reverse of the order in which they were found makes the substitution simplest.

We can then substitute calculated values, much like the Brzozowski algorithm. First solve for A|B|C|D|E:

I haven't done any exhaustive analysis of common regular expressions, commonly-arising finite state machines, clever ways to implement the Brzozowski algorithm, comparisons in the field between the relative efficiencies of my algorithm and Brzozowski's, or anything. I must confess, the amount of mathematical research I've done here is minimal; all I've done is make this new algorithm. (At least, I think it's new. What do I know?)

The finite state machine used here was picked because it is referred to here and proved to be extremely challenging for me to regexify programmatically (even by hand it's pretty tricky). By dumb luck it turns out that my algorithm handles it pretty well. There are FSMs for which even my algorithm produces pretty unreadable output. How much use is this? You tell me.

I'm just throwing this out there. If this hasn't been done already, it may be the first genuinely new piece of vaguely mathematical work I've ever done, which would be stunning. A Python implementation follows.

Back to Blog
Back to Things Of Interest

...this may prove to be useful.

Hey, you might take a look at the proof for theorem 4.4.2 in Chapter 4 of Models of Computation. The author gives a dynamic programming algorithm for doing this and it's quite nice. The book is available from the authors' site, http://www.cs.brown.edu/people/jes/book/ Best regards, .

Looks like you are (implicitly) constructing the reverse NFA (by reversing the transition arrows), then doing a subset construction on that NFA to yield a DFA for the reverse language, then doing the standard conversion of a DFA to regular expression. If that's the case, then all you have done is let new_complexity_of_regular_expression(DFA) = old_complexity_of_regular_expression(reversal DFA), so in the end it will all even out. Every time your algorithm does really well, the original algorithm would do well on the reversal DFA, and conversely every time your algorithm does badly.

Yes, I see you are correct. My Python implementation now uses the Brzozowski algebraic method explicitly (without the partially obfuscated FSM reversal step), while making reversing the FSM available as a separate method if desired.

Do you have implementation of your algorithm in C/C++ or any other language?
Contact
About
© qntm