How to play Absurdle's challenge mode

In Absurdle's challenge mode, you are provided with a target word, and you must force it to be the secret word. It's no longer sufficient to back the game into a corner. You have to back it into a specific corner.

This mode is much more challenging than basic Absurdle. This mode is recommended for advanced players, who have a sound understanding of how the Absurdle AI works.

Here are some key points to remember:

A good basic strategy is to intentionally guess letters which aren't in the target word. Absurdle is very likely to rule them all out, because ⬜⬜⬜⬜⬜ is often the response associated with the largest possible bucket of remaining words.

But this often isn't the case! Here, the target word is "SCRUM". So we guess "PLEAT", which seems like a good guess, because "PLEAT" has no letters in common with "SCRUM". But... 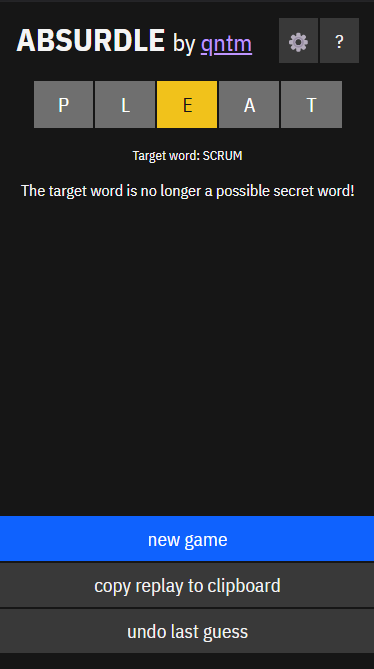 Why did this happen?

This in turn means that there is an "E" somewhere in the secret word — which means that "SCRUM" is no longer a possible secret word. We've missed the target! So we have to undo (click or tap "undo last guess", or press Ctrl+Z) and try again.

As the game continues, this becomes more and more problematic. I find that a lot of trial and error is involved. One approach is to slowly eliminate unwanted letters a few at a time, by intentionally guessing words which reuse some letters which have already been eliminated... but this can be slow going and require more guesses than necessary. Later, as the pool of possible letters dwindles, we have to eliminate potential locations of the remaining letters.

Here's a complete sample game by me.

Not shown here are more than a dozen bad guesses which I had to undo.

Anyway, as I say, challenge mode isn't for everybody. If you do decide to tackle it, be assured that challenge mode is always possible — you will never be given a target word which can't be forced. This remains true even when challenge mode is combined with hard mode, but combine modes at your own risk!

Challenge mode has not been cross-tested with expanded vocabulary mode, yet. Again, player beware.

Absurdle ends the game if the target word has been outright eliminated as a possibility... however, there are more complex unwinnable states which it can't detect. If in doubt, undo to the very beginning and start over.

Back to Code
Back to Things Of Interest

Unwinnable states are definitely possible in hard mode - you can get a situation where the target word hasn't been ruled out, but none of the remaining words can force it, so you have to back up to an earlier word and try something else. The target word was PHONY I played: STALE, CURRY, FIGGY. This tool gave me 51 words that fit, and none of them work. https://wordfinderx.com/words-for/_/words-end-in/y/length/5/exclude-letters/stalecurrfigg/?dictionary=all_en&extended_fields=true= I don't know if it's possible to reach unwinnable states in normal mode. I'm leaning towards no, because you can always rule out one letter or one position at a time to narrow things down as you need, but I can't prove it.

Can we have the option to choose our own challenge word? I want to play challenge mode absurdle where the target word is today's wordle.

I tried this a few weeks ago before it was part of Absurdle. My first target was VIXEN which I successfully forced. I forget exactly how many guesses it took but some where around 8 - 10, with no backstepping (I think). Having had instant success I tried a few more words and decided it was all too hard! So, knowing that VIXEN is possible, what is the smallest number of guesses, without deletions, that anyone can use to reach this? Good luck.

Every word in the list of possible secrets has a solution (with both hard + challenge mode) turned on. (I wrote a quick script last week to verify this.)

Ooh, this is fun! Forced BROWN in 9 with no undos after a few failed words (POSER was really tricky due to anagrams...).

Super, super fun game, thank you so much! I just forced shade in 7, now will try hard &challenge :) Has anyone tried to reach the maximum number of valid guesses in hard mode? (Not challenge mode obvs)

Good game. I like the way you need opening moves and an end game simultaneously. Interesting to see how strategies evolve. I'm using 6-7 moves now and wondering whether I need to change my strategy to get down to 5, or whether I can just practice the same strategy and improve the odds. P.S. Why does it not let me have j=sqrt(-1) ??

I usually solve challenge mode in 8-10 tries, but always have to use undo a few times. Is it possible with practice (or a better brain) to always guess target word without having to undo?

This is now my favourite word game. I love Challenge Mode. Thanks!

Awesome mode! 1st try got it in the 11th move with 2 undos. Kudos for coming up with this.

I wonder if this mode in a dordle format would have any winnable pairs. Seconding the request for custom target words!

Target word mode isn't fun. It seems like it should be, but it's just an instant fail every time. Am I supposed to be cheating using an online tool or something?

I seem to have reached an unwinnable state in Challenge (without Hard or Expanded on). With the target word COMMA, and the first four guesses of RETRY, HINDS, TRAIN and TRAIL, I don't think there's a word I can enter that doesn't end in defeat, though I might have not considered all playable words: QUACK ABACK ALACK KAPPA MACAW COMMA MAMBO MAMMA GAMMA MAGMA CACAO COCOA GUAVA GUANO.

No, ignore me, I was having a moment. The sequence can of course be continued, by, e.g., QUEST, TURKS, GRUNT, BRUNT, MACAW, COMMA. It's not a very elegant route to the answer, but it does work.

This is the best wordle spinoff yet, I'm LOVING challenge mode!! Challenge+hard is frustratingly excellent - I managed to solve for BRUTE in 6 tries (phew) but it took me far too long (~20 mins). I was starting to think I had reached an unsolvable position with my opening words (SADLY and CHING) because I must have had to undo dozens of third guess words that made the target word impossible! (ended up solving with KEMPT, TOQUE, BUTTE). However with just challenge mode on its own, I take far more tries (10 or more) but I'm able to solve way faster and with minimal undoing -- ah, the luxury of using eliminated letters! Haven't been able to solve without using undo yet. Thank you for this game!!! PS - Custom target words please!!

I just did the Absurdle on challenge mode (target word "Arbor"), and it took me forever (18 guesses) but I'm a teenager, not a nerd, so I'm pretty proud of myself

Ever since my fourth or fifth game of Absurdle I was thinking of this mode (which I was calling 'called shots') and was going to challenge myself to it when I thought to look at the settings to see if it happened to exist. So glad you already have it. I agree with others that it should have the ability to set your own target. But you can do this informally in normal mode. I've been fascinated by Absurdle from the beginning since it is a game rather than a puzzle. You are attempting to corner a dodging AI. But there are a lot of predictable drawn-out end sequences and these start to get a little repetitive. Like a lot of game AIs, especially ones built on simple rules. Intentionally avoiding the *a**y or *o**y endgame slog is a first step towards Challenge mode. I'd love to see some more stats at the end to make it easier to track other possible personal best challenges, such as most or least letters eliminated.

Forced my dad to play 6 games of Absurdle.

This discussion is closed.